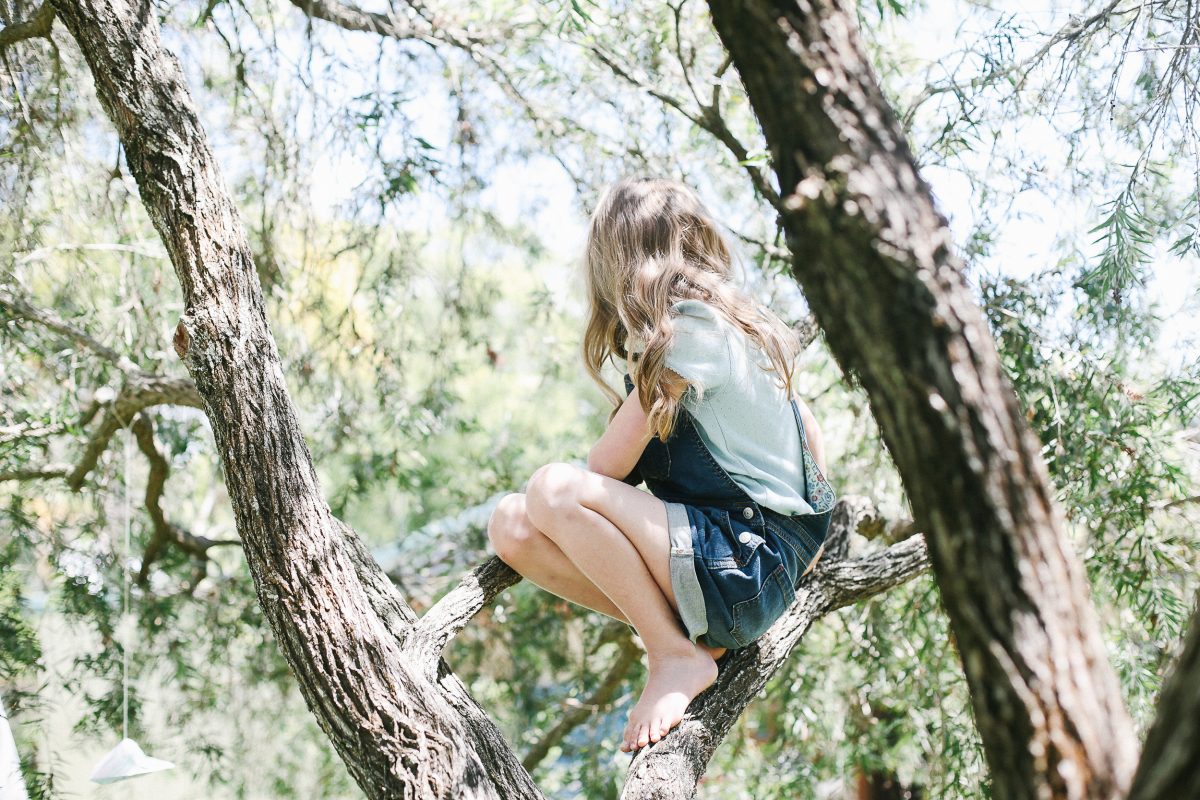 dungarees and pretty tees are perfect for tree climbing

I’ve always admired those people who are spontaneous and fearless; the ones who can venture to new places on a whim without worry.

I suppose I admire those people because I’m the exact opposite. And yet admitting this to myself, knowing it’s my truth, has been incredibly confidence boosting.

Over the past few months I’ve come to realise that complacency is just about as fear-inducing as change. So when Daniel and I started talking about travelling Australia in a caravan I knew that if we decided not to do it, it would be something I’d regret.

So this week, as fear and doubt has bubbled to the surface, making me question the legitimacy of such a venture, I’ve sat with those feelings, tossed them around in my head and realised that they’re all part and parcel of the process. Or my process, to be precise.

One of the biggest fears I have is money related which I realise isn’t a particularly unique concern. But this trip requires a significant amount of our savings which means we’ll take off with a much smaller amount in the buffer account. On the exact same day that this concern arose I was reading one of the many travel-inspired facebook pages that discussed this very topic. And there were countless people who shared exactly how much money they had in the bank when they hit the road: $8000, $2500, $700, $200. Reassuring to say the least.

So now that I’m on the other end of my fear/doubt crisis, Daniel and I are starting to plan. Or starting to plan exactly how to plan. Because it’s big and I’m not really sure where to start. Honestly, where to begin?!

Yesterday, when it all became a bit of an overwhelming whirr, I ventured into the backyard and chatted to Poet as she climbed trees. And then Marigold woke so I carried her outside and popped her in the washing basket and watched as she became mesmerised by the sheets drying on the line. And for a while there everything was quiet and still and my priorities fell back into place.

I got up this morning intent on holding onto the same sense of peace and quiet – so far, so good. Coffee with a friend was just what I needed and this afternoon this black dress arrived in the mail which is the most flattering breastfeeding-friendly thing I have ever owned. Because when you’re three-and-a-half months postpartum and only a handful of clothes fit and you don’t feel particularly lovely in anything, a classic dress made from the softest cotton muslin, that covers the arms and cinches at the waist, is absolutely glorious.

Hopefully this weekend will be peaceful and productive – for all of us.