Yesterday morning I served The Humidity an official eviction notice which backfired; the heat was stifling and I felt like I was to blame. Today is cooler and while the clouds still threaten and the house feels like it’s expanding with moisture, I think we might be a step closer to true autumn (please, let it be so).

This year, autumn is The Season Before The Baby Arrives and so I’m treating it a bit like spring; time to ready and prepare and sort and declutter and organise and put everything in its place. Of course, such grand visions of pre-baby organisation is lofty for a mother-of-three but making lists is a forte of mine during pregnancy and right now I’m listmaking like the best of them.

I have a list on my fridge of things I want to get done today. It’s getting all the “what’s coming next” out of my head while I cook dinner and restoring a sense of order to my tomorrows. I write the most mundane chores on there as well as phone calls to make and emails to send and so on any given day I may jot down: washing on by 7am, pay for school photos, call re: car insurance, strip and wash beds, sort Percy’s AW clothes, re-organise games + puzzle cupboard. Very rarely does it all get done but the sense of achievement when I take a pen and strike through something on the list? Nothing compares.

My seasonal cleaning goals are a little bigger and I admit, I’m getting a head start because I know that come early winter I’ll be cooking and baking and freezing and resting and there won’t be any time or energy or inclination for wardrobe clean-outs. Now that Poet is at school she wears about 4 outfits a week…and that’s it. She has so many beautiful dresses and skirts and cardigans that are sitting pretty in the wardrobe but don’t venture beyond the hangers. Granted, my washing pile is significantly reduced as a result but a bit of sorting is in order.

And then there’s my wardrobe which I share with Daniel and Percy (and soon the baby) that extends the entire length of our bedroom and offers so much in the way of floor-to-ceiling storage. This is a wonderful thing for a big family but it tends to make me lazy in that I’m more likely to throw clothes and paraphernalia in and there it patiently sits, waiting to be sorted. I have visions of pulling everything out, wiping down shelves, reorganising coat hangers and placing everything in there just so. Alas, it’s yet to happen.

But it will, albeit one shelf at a time. I do all of this knowing that it will be so long before I get the time and energy after baby is born to do it all again. And somehow, sorting everything now means that the house will be in some semblance of order when baby arrives. In retrospect, my house is always at its most sparkling in my 39th week of pregnancy.

Along with the to-do lists I have plans to knit two blankets. Two, you ask? Well, Percy was an early autumn baby and knitting throughout summer just didn’t eventuate so the poor third child has been without a mama-knitted super easy baby blanket. But that is to be rectified in the next couple of months (I’m just waiting on the wool to be restocked and then I’ll order!) and I can’t wait to perch myself in the armchair with needles and wool in hand. The perfect antidote to my lists; mindful meditation through knitting.

And Easter! It’s just around the corner! There’s Easter daisies at the front door and I’ve discovered the best locally-made no-nasties-added hot cross buns which, when toasted and lathered in butter, are just perfect for celebrating the season. 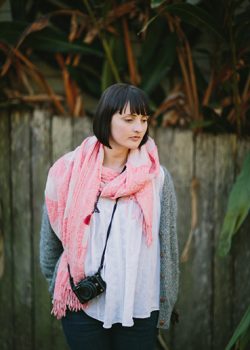